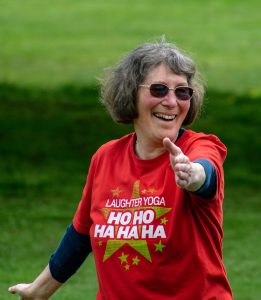 As we slowly start recovery from the COVID 19 Pandemic, I am beginning to run indoor ‘in-person’ Laughter Yoga sessions again at my Laughter Yoga clubs, bearing in mind physical distancing and taking all the necessary precautions.

I am also running a monthly ‘Walk and Laughter Yoga’ session in local parks.

I continue to run weekly sessions on Zoom.

Hello – I am Maggie Thompson and ‘Merrie Maggie’ is the name I deliver Laughter Yoga under.  I live in Stourbridge in the West Midlands.

Let me give you a very basic introduction to Laughter Yoga through the following short video – it lasts around 10-minutes: 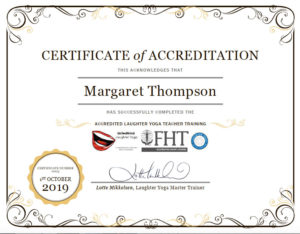 What inspired me to get involved with Laughter Yoga?

In around 2008 or 2009 I attended a Laughter Yoga workshop that I facilitated for exercise tutors delivering to older people Whilst I worked for Age UK Dudley through my role as LEAP Over 50 Project Co-ordinator.

Luckily, I attended the training myself and was in for a treat! Being easily prone to giggling, I launched myself at the routines during the training and discovered that it is easier to ‘laugh for no reason’ than a lot of people think.

For me, that one experience was a ‘lightbulb moment’ and has led me along an incredible path of joyful discovery.  Not only feeling the health and wellbeing benefits from a daily practice of Laughter Yoga but also becoming part of a loving, caring, laughing community around the world. 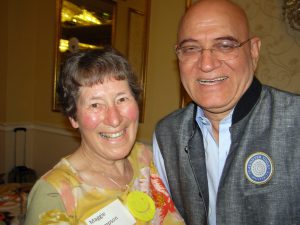 I have since attended:

In April 2017, Dr Madan Kataria awarded me Laughter Ambassador for promoting Laughter Yoga.  I feel deeply humbled and privileged to receive this award and will continue to devote my energy to raising awareness of Laughter Yoga. 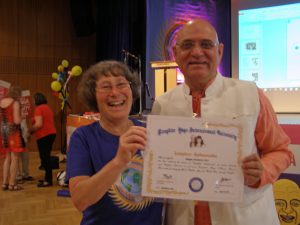