Talking about Laughter Yoga and its benefits:

I wrote an article about Laughter Yoga in the monthly magazine aimed particularly for older people and you can find it on page 10 by following the link: 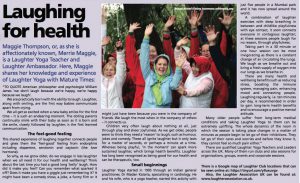 You can also read the article here.

On 12 April 2018, the ITV Programme ‘Tonight’ showed a Documentary called ‘OAP Bootcamp’.  This highlighted the number of older people aged 65 plus that the NHS has to look after.  It also highlighted how a lot of older people are lonely, get little exercise and don’t have a healthy diet.  The programme took 5 volunteers and during the space of a week introduced them to different activities: Weights keep fit, Ballet keep fit, Healthy Eating, Knit and Natter and Laughter Yoga. I was delighted to be part of this documentary leading the 5 volunteers in a Laughter Yoga session.  The programme was available on the ITV Hub for 30 days after it was screened but a resume about the programme can be seen by following this link:

On 20 March 2018 I was invited to speak about Laughter Yoga on ‘World Happiness Day’ with BBC Radio Hereford & Worcester.  Here is the recording:

Express & Star had a feature on 20 January 2018 that included a full page about ‘What it’s like to teach ‘Laughter Yoga’: 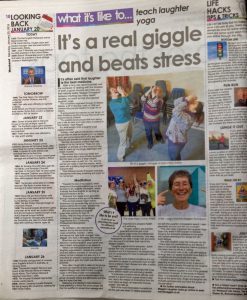 You can read the full content by clicking this link:

Also, early in 2014 I was interviewed by the Press Association from which they created an article about my Laughter Club which appeared in the March 2014 issue of Chat Monthly (page 59).

The Worcester News also created an article in their September 2014 health feature about Laughter Yoga and its benefits: